Once again the Islamic Republic has done a flagrant violation of human rights while the world keeps silent towards it. The discriminatory behavior of regime regarding the believers of other religions or paths rather than Shia (the Twelver Ja’fari Path) can be considered as a continuous movement of Safavid Era – which created a “nationalized religion” to put an end to Iranian efforts against Islam invasion and announcing Iran (the then called Persia) as an Islamic State – with some differences and against all values and regulations Internationally recognized and declared. A group of Iranians is now deprived of their right to have a National ID Card based on their religious beliefs since the National Organization for Civil Registration which is managed by Islamic Republic Interior Ministry has opted out the option “Others” in “religion section”. This discrimination is not something new and since Islamic Revolution in 1979, many non-muslim Iranians rights have been violated, namely: shutting down their businesses, prohibiting Muslims to do business with them, ruining their sacred places and prohibit them from practicing their religious ceremonies, prohibiting them from education and studying their religion, ruining their graveyards and now has taken a big step to deprive them from their fundamental rights, i.e. having Identity documents, which puts the burden on us to support them. Just a few days ago, in IRIB there was an interview with a woman, Zeinab Aboutalebi, mentioning if someone does not agree with Islam or the Islamic Republic should leave the country; Alamolhoda, the presenter of Khamenei in Khorasan Province and head of the judiciary system, Ibrahim Raeesi’s Father-in-law, claimed in Friday prays in the 8th Shia Imam’s Shrine Iran belongs to Islam and Muslims, thus anyone disagrees with this idea must either die or leave the country.

Nevertheless, the reactionary Islamic Republic regime has entered a new era by opting out the “other” option in the religion section for non-muslim Iranians to push them to leave Iran, their homeland for thousands of Years. Lack of National ID will cause them so many complications and difficulties in their daily routines including banking and financial activities or any government-related affairs, and this include Iranian Bahaiis, Yarasanis, Babis, Zorvanis, Izadis, etc.

From the national legal point of view, principle 12 of Islamic Republic Constitutional Law: “The official religion of Iran is Islam and the Twelver Ja’fari Path, and this principle will remain eternally immutable. Other Islamic paths, including the Hanafi, Shafi’i, Maliki, Hanbali, and Zaydi, are to be accorded full respect, and their followers are free to act following their jurisprudence in performing their religious rites. These paths enjoy official status in matters of religious education, affairs of personal status (marriage, divorce, inheritance, and wills) and related litigation in courts of law. In regions of the country where Muslims following any one of these paths constitute the majority, local regulations, within the bounds of the jurisdiction of local councils, are to comply with the respective path, without infringing upon the rights of the followers of other paths.” Principle 13 continues: “Zoroastrian, Jewish, and Christian Iranians are the only recognized religious minorities” whose rights are officially reserved by the Islamic Republic, although within the limits of the law. Principle 14 is a more important principle among the aforementioned principles as it indicates that: “Under the sacred verse; (“God does not forbid you to deal kindly and justly with those who have not fought against you because of your religion and who have not expelled you from your homes” [60:8]), the government of the Islamic Republic of Iran and all Mu slims are duty-bound to treat non-Muslims in conformity with ethical norms and the principles of Islamic justice and equity and to respect their human rights. This principle applies to all who refrain from engaging in conspiracy or activity against Islam and the Islamic Republic of Iran.” Thus, Iranians who are not Muslim, Zoroastrian, Jewish or Christian according to this principle are free to live in Iran and are in “full safety” of the Islamic State, and not only Muslims and government must respect their rights, but also they are obliged to behave them respectfully.

“Principle 19: All people of Iran, whatever the ethnic group or tribe to which they belong, enjoy equal rights; and color, race, language, and the like, do not bestow any privilege; Principle 20: All citizens of the country, both men and women, equally enjoy the protection of the law and enjoy all human, political, economic, social, and cultural rights, in conformity with Islamic criteria; Principle 22: The dignity, life, property, rights, residence, and occupation of the individual are inviolate, except in cases sanctioned by law; Principle 23: The investigation of individuals’ beliefs is forbidden, and no one may be molested or taken to task simply for holding a certain belief.”

Identity Documents are the results of having a nationality, and as long as someone does not have a nationality, cannot ask for Identity documents; moreover, the government cannot deprive the people of its nation of having Identity documents this is not interpreted as a social right that can be deprived by a court order or even a law or regulation. According to principle 41: “Citizenship of Iran is the unquestioned right of all Iranians. The Government may not deprive any Iranian of his citizenship, except at their request, or if they take up citizenship of another country”. Adding article 976-1 of civil Law: “All persons residing in Iran except those whose foreign nationality is established” are considered to be Iranian. So, in point of view of Constitutional law of civil law, to be an Iranian is not conditional or restricted to some reasons such as religion and what National Organization for Civil Registration and the Islamic Republic regime has done, according to the currently enforced laws is illegal and as it is violating acquired rights of a group of people, it can be filed as a case and take those in charge to the court, but practically they can do nothing.

The issue about nationality is also mentioned in the Universal Declaration of Human Rights and accordance with its 15th article having a nationality and enjoying its advantages is a fundamental right. Also According to article 24 of the International Covenant on Civil and Political Rights, “Every child has the right to acquire a nationality” immediately after birth, and therefore no one including governments is allowed to deprive them of this right. As a result due to international human rights documents, which are signed by Iran and according to article 9 of civil law have “the force of law” within the borders, discriminating and depriving a group of Iranians is a flagrant violation of Islamic Republic international obligations and duties in regard of acting without any discrimination according to articles 2 and 3 of UDHR and principles 19, 20, 22, 23 and 41 of constitutional law.

This issue is not dedicated just to Iranian Bahaiis, Yarasanis, Babis, etc. and sooner or later the Islamic Republic will deprive the followers of other religions or paths from the right to have Identity Documents. Feily Kurds are an example of being deprived of this right for the last decades and when someone has no IDs issued cannot prove his/her nationality and identity, so that person must be classified as apatride or stateless. It is vital to know that expanding statelessness according to enforceable International documents is forbidden, but the Islamic Republic not only ignores this but also is expanding it. Anti-Iranian Regime invaded Iran, now are willing to push Iranians to what had happened to Egypt and abolish Iranian old culture and civilization and replace it with Islamic-Arabic culture and civilization in 14 centuries ago. The regime claims that they are confronting those groups seeking separation, but in practice is supporting them and make the unity and integrity of Iranians vulnerable and deep, and uses the gap between the people to guarantee its power and governing.

Considering the Islamic Parliament Election in a close future, this issue can be reconsidered by the reformists or extremists and add the “other” option once again in the forms and try to convince people to vote, but the question is how long more can Iranians allow Anti-Iranians rule them? When Iran-Iraq war started, it did not matter whether one is Bahaii, Yaresani, Babi, Muslim, Zoroastrian or even Atheist, also it was not a matter of question that you are Kurd, Khozistani, Azeri, Gilaki, Lor, Fars, etc. and the only thing mattered was: Iran Integrity and defending threats. Nowadays the enemy is amongst Iranians and is ruling Iran and it is up to us, as Iranians, regardless of any beliefs, race, ethnic, language or other differences, focus on Iran and end the 41-year invasion and ruling Iran, using nationals wealth to fulfill its purposes in the region and the world and consider all Iranians, except those cooperating with them, as second class citizens. 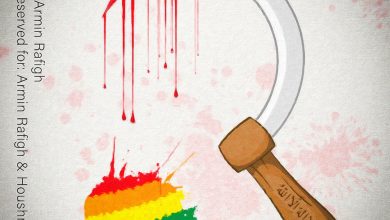 Quiet! Rainbows do not shout

Borhan Kamangar Summoned to do his time

Abbas Dehghan, One of the Gonabadi Dervishes, Detained for 795 Days and Uncertainty Without Sentencing